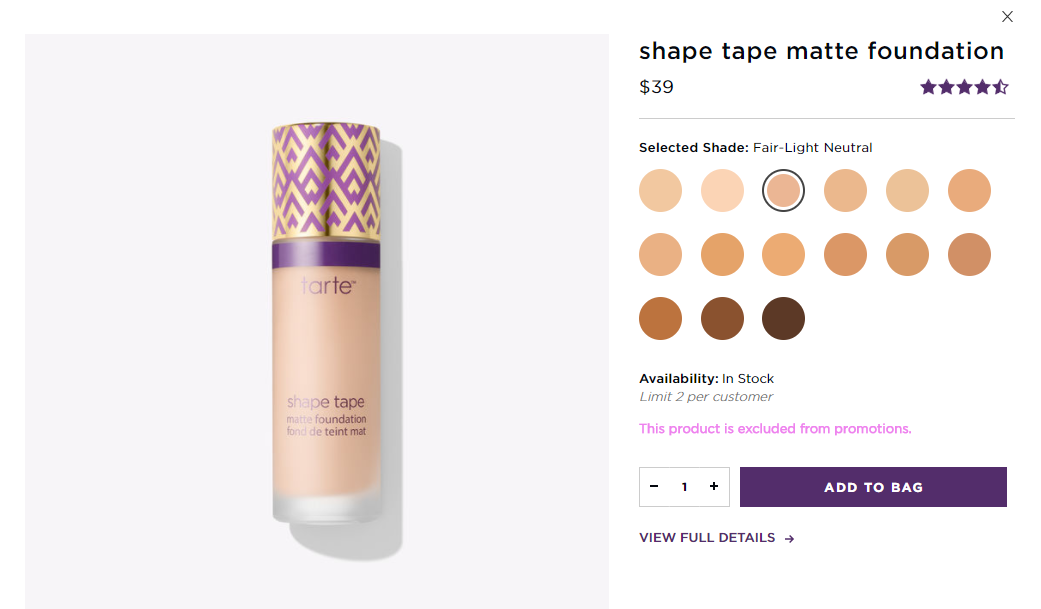 I’m a little late to this party, but I wanted to weigh in on the recent Tarte controversy.

I use the term controversy lightly since it’s makeup and really, how seriously should we take it?

If you haven’t heard about this yet, Tarte released the Shape Tape Foundation to go with the Shape Tape Concealer, and the shade range is garbage. There are matte and hydrating versions, and they each have 15 shades.

People are super pissed about this because the actual colors go from fair to medium, with a couple of darker shades thrown in, seemingly to appease those of us who expect people of color to be able to purchase a Tarte foundation. Even I would struggle to find a shade that worked for me, and I don’t have a particularly unusual skin tone. I’m light medium with neutral undertones, but I wouldn’t be able to purchase one of these and just use it out of the bottle. That’s kind of what I expect from a foundation, and I don’t think it’s unreasonable to not have to mix my foundations to get the right color. Expecially when I’m spending $39 on said foundation.

I’m not thrilled about this; I expect a high end brand like Tarte to have a decent shade range when a product is launched. We’re not talking about a Rimmel or Catrice foundation here (not to knock those brands because you know I love them, but their foundation shade ranges have historically been terrible). Tarte hasn’t ever had a great shade range with their complexion products; I mean, look at the Shape Tape Concealer. There are only 14 shades. There’s also now some mumblings about Tarte repackaging the Double Duty Beauty gel foundation and calling it something new. I’m not even going to get into that; I don’t think that having the same ingredients in a foundation necessarily means it’s the same product. Like, how many different ingredients could there be? But some people are convinced it’s a thing.

So people are FREAKING OUT. I think the rage and vitriol that’s been directed at Tarte over the past couple weeks is a little insane. I mean, come on guys. It’s makeup. Is it really worth getting this angry over? I understand that this might be coming from a place of privelage since I don’t often have trouble finding a foundation shade, but it’s just not that serious to me. Also, Tarte isn’t alone in having a crap shade range. A bunch of brands have released foundations lately and they’ve all had less than 20 shades. I’m thinking of Rimmel, Maybelline, Too Faced, Armani, Estee Lauder, Guerlain… they’re all guilty of this same crime, but only Tarte is getting this level of rage. Why? I feel like Tarte is a generally good company, and I love a ton of their products.

I wasn’t interested in this foundation before, and my feelings haven’t changed. I think we as a community need to relax. Sure it sucks, but it doesn’t call for a boycott or anything.

6 thoughts on “The Tarte situation”