Why yes, I am reading more YA fantasy.

With all of the things happening in my life recently, like moving across the state, massive changes in my job, and just generally trying to keep my head above water, I’ve been taking more time than usual to chill out and just read. I’m not reading anything particularly thought-provoking or requiring much mental energy, which is ok with me. 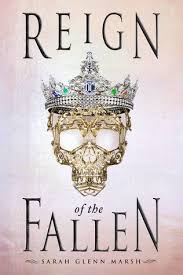 The plot (from Goodreads): Odessa is one of Karthia’s master necromancers, catering to the kingdom’s ruling Dead. Whenever a noble dies, it’s Odessa’s job to raise them by retrieving their souls from a dreamy and dangerous shadow world called the Deadlands. But there is a cost to being raised–the Dead must remain shrouded, or risk transforming into zombie-like monsters known as Shades. If even a hint of flesh is exposed, the grotesque transformation will begin.

A dramatic uptick in Shade attacks raises suspicions and fears among Odessa’s necromancer community. Soon a crushing loss of one of their own reveals a disturbing conspiracy: someone is intentionally creating Shades by tearing shrouds from the Dead–and training them to attack. Odessa is faced with a terrifying question: What if her necromancer’s magic is the weapon that brings Karthia to its knees?

I’m going to try to make the rest of this as spoiler free as humanly possible, though this book can be pretty predictable so if you read it you’ll likely spoil it for yourself. I did.

Overall, I enjoyed it. I enjoy Marsh’s writing style and wasn’t annoyed by her language or the way she uses dialogue, which happens frequently with YA, as much as I love it. There was a lot of weird teenage romance back and forth that I found off-putting, but I’m coming at it from an adult perspective where things like communication and honesty are the norm. I appreciated the level of nonchalance afforded to the various LGBT relationships and the visibility of the book’s one bisexual character. The sexuality of the main cast isn’t exactly glossed over, but when you meet the first gay couple it’s not a thing; no one in the scene is exclaiming “OMG TEH GAYSSSS!!”, and the author isn’t using them as show pieces to illustrate her decision to be inclusive, and I appreciate these things. The reader is introduced to Simeon, a necromancer, and Danial, his healer boyfriend.

I think that the way magic is used in this book is interesting; every person in this universe is born with some kind of magic, and you can tell the type by their eye color. People with blue eyes are necromancers, green eyes are beastmasters, grey eyes control weather, etc. Odessa’s blue eyes allow her to see the gates to the Deadlands, which are also blue, but the author doesn’t go into detail about what other classes are able to see or do that correlates to their specific eye color. Like, she didn’t say that people with grey eyes control weather because they can see storm clouds forming, which would make sense for that class.

The reason this book is called Reign of the Fallen is because the king and queen of this realm are Dead, and have been for hundreds of years. They keep coming back from the Deadlands because they genuinely believe that they’re the best people to rule Karthia and have its inhabitants’ best interests at heart. This is true: the king seems to be a good man who loves his people and wants to do right by them. The problem is that the Dead are terrified of change, and as a result it’s been outlawed. Right, no changes allowed.

Think about that for a second… this civilization isn’t allowed to advance. Everything from their technologies to their laws and fashions remain the same. People aren’t allowed to leave the kingdom to learn new things or make improvements to things like sanitation or transportation, it’s just status quo forever. Literally, because the king will reign eternal. I thought that this was one of the more interesting points in the book, not only because I can’t imagine living in a world that’s so stifling, but also because it seems odd that the people would just go along with it. Especially the poor people living in the city slums who get to contend with constant plagues due to terrible sanitation and a lack of medical knowledge.

It’s an interesting premise, all around, and this book tackles some difficult topics like grief and addiction that I don’t see a lot in YA. I like the main character, generally, though she can be a bit of a whiny brat. If you’re into YA fantasy, death and LGBT characters it’s definitely worth a read.

Have you read anything good lately? I love getting recommendations!

6 thoughts on “What am I reading? Reign of the Fallen by Sarah Glenn Marsh”