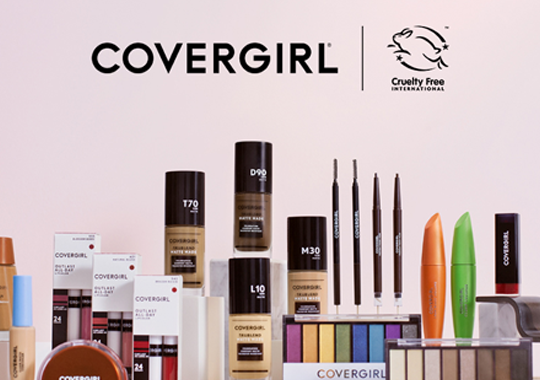 Cruelty Free International, formerly the ‘British Union for the Abolition of Vivisection’, has existed for over a century and from its inception has aimed to end experimentation of any kind on animals. They’ve awarded their Leaping Bunny Certification to CoverGirl, meaning that the brand has met a specific set of criteria, including setting a timeline not only for ceasing their own testing, but also the testing of any of their ingredients by suppliers. The products may not be vegan, but individual ingredients won’t be tested on animals. They’ve also agreed to independent audits and oversight by CFI.

CoverGirl’s parent company, Coty, owns both drugstore and prestige brands, including Burberry, Wella, Calvin Klein, OPI, and Rimmel. Supposedly CoverGirl is just the first of their brands to complete the certification process, with more coming next year.

I probably don’t need to tell you this, but this announcement is HUGE.

While this is good news for all of the poor lab bunnies, this could have a negative impact on Coty’s bottom line, primarily because they’ll need to completely exit the Chinese market. Chinese law requires that products be tested on animals to be sold in the country, but one of the caveats in the CFI certification states that the brand won’t allow their products to be tested by third-party labs. Having independent labs perform the tests is how so many brands can call themselves cruelty-free while still selling in China. It’s sort of a loophole; since they’re not doing the actual testing it doesn’t count, right?

As far as I know, China is the only country where this is the law. It seems really antiquated to me. While I’m not someone who’s terribly strict about the cruelty-free or vegan status of the things I buy, I do try to give my money to ethical companies who recognize that animal experimentation isn’t actually necessary in the 21st century. Not only do we have the ability to replicate human skin in labs, but we also know what happens when we put the majority of these compounds on our skin. Do we really need to dump laundry detergent or shampoo in the open wound of a poor little woodland creature to know that it’s painful?

And yes, this could all be a marketing ploy to raise Coty’s public profile, since we as a community almost never talk about this company as a whole, but even feigning a sense of social responsibility is pretty good. Should their motivations matter if they’re following through with their promises and putting some good into the world?

What do you think about this? Marketing stunt or genuine desire to make the world a better place, and does that even matter?